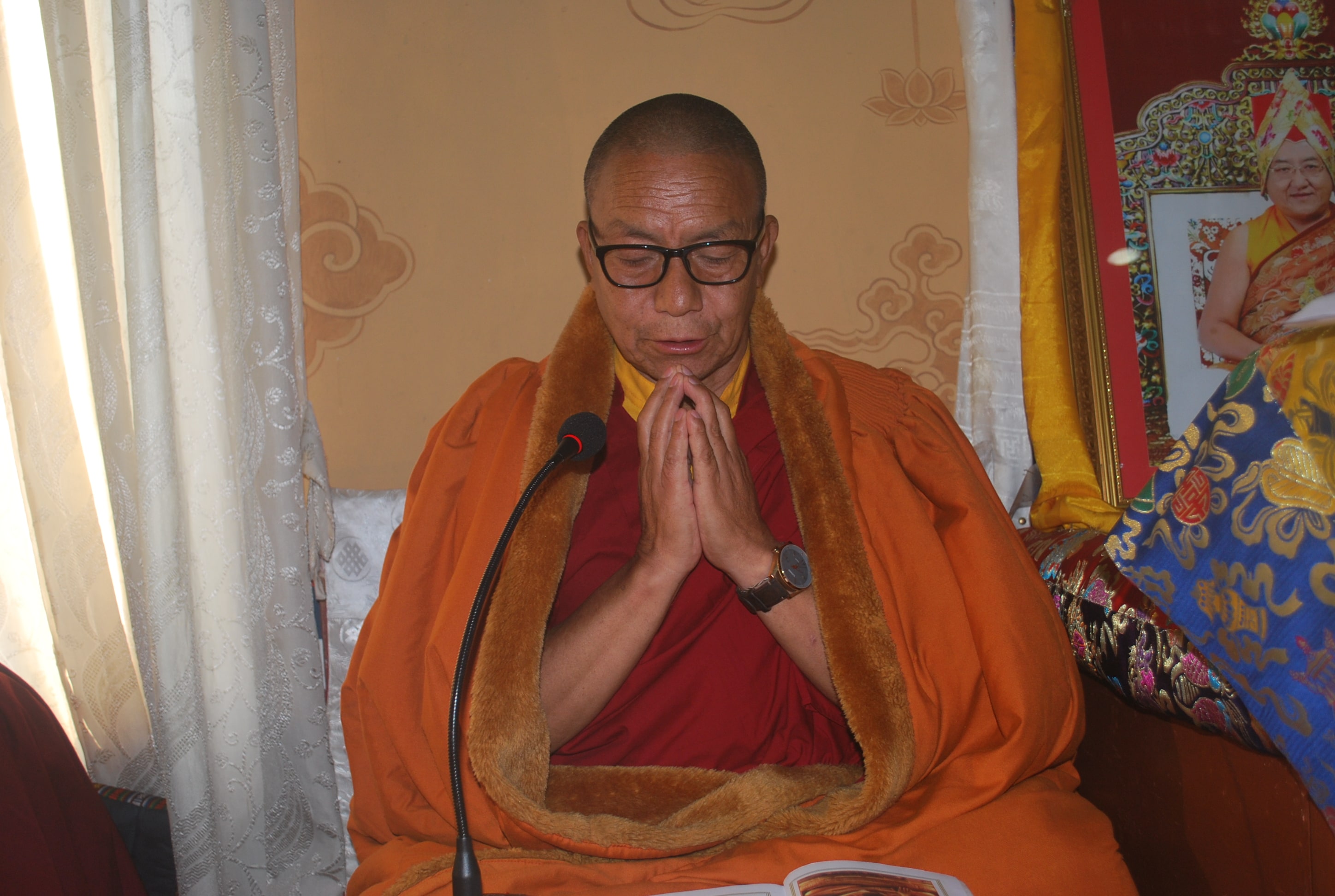 Venerable Khenpo Tsewang Rigzin was born in a home where one of the most faithful devotees and a popular minister called Kalon (minister) Tsewang Sangpo and his son Jetsun Kunga Drolchok were born. Venerable Khenpo Tsewang Rigzin was born on 29 June 1959 to father Jamyang and mother Nyima Woser in Phuwa Village, Mustang. His father Jamyang was a lineage of a famous aristocracy family and his mother Nyima Woeser was a daughter of King Aaham Jamyang Palbar's daughter, princess Aachung. Mother Nyima Woeser passed away after eight-month of Khenpo's birth. His father fed him cow milk through his whole baby period. At the age of 12, he received the ordination of the lay devotee (དགེ་བསྙེན་གྱི་སྡོམ་པ།) from late His Eminence Chogye Trichen Rinpoche during the empowerment of the "twelve refining factors" (སྦྱོང་བྱེད་བཅུ་གཉིས་ཀྱི་བཀའ་དབང་།) bestowed by Rinpoche in Namgyal monastery. Then, he entered as a novice monk in Namgyal monastery. He learned to read and write the Tibetan language from his grandfather Ven. Yonten Sangpo commonly called 'Meme Gaga'. In Tibetan Buddhism, every learner takes refuge in the deity of wisdom, "Manjushri". Thus, his grandfather advised him to memorize "Manjushri Nama Samgiti" (འཇམ་དཔལ་མཚན་བརྗོད།) to sharpen the mind to acknowledge wisdom.

At the age of 15, he got chance to attend the empowerment of "path and fruit", (ལམ་འབྲས།) and "Kalachakra" (དཔལ་དུས་ཀྱི་འཁོར་ལོ།) from late His Eminence Chogye Trichen Rinpoche in Charang monastery, Mustang. He did not get proper education during his childhood period due to the poor financial condition of his family. At the age of 19, he lost his gracious and beloved father.

In 1980, Namgyal monastery received a dharma notice regarding the empowerment of "path and fruit" (ལམ་འབྲས།) in Sakya Monastery Puruwala, India by His Holiness 41st Sakya Trizin Rinpoche. All the monks were ready to visit India to receive empowerment, but Khenpo Tsewang did not have travel expenses to go with the other monks. Therefore, having no choice, he went to sell the pure woollen robe gifted by his beloved father when he entered as a novice monk at Namgyal Monastery but he could not sell it and had to exchange it for a cow. Again, he went to sell the cow hoping to get some money but again he had to exchange it for grain. Finally, he sold the grain in Lo-manthang. He got NRs. 725 at that time. However, he managed to reach India with NRs. 725 and he could attend the empowerment of "path and fruit" (ལམ་འབྲས།) in Sakya Monastery, Puruwala, India from His Holiness 41st Sakya Trizin Rinpoche. He was 21 and never had proper monastic education until then. During the empowerment, he noticed that all little monks younger than him were reciting the prayers without looking at the text. He was so embarrassed that he knew nothing. He built up the courage to learn and brought enthusiasm within himself after this incident. On that empowerment, he got a chance to meet His Eminence Luding Khenchen Rinpoche. He requested His Eminence Luding Khenchen Rinpoche to allow him to study in the Ngor Monastery Manduwala, North India. Fortunately, Rinpoche accepted him to study there. From then, he struggled hard in his studies every single day and night. After four years, he successfully passed the monastic traditional oral examination of his ritual dharma practices in front of His Eminence Luding Khenchen Rinpoche and His Eminence Ngor Khangsar Rinpoche. Both Rinpoches were very pleased with his performance and appreciated his hard-work and enthusiasm. Then, the general secretary (ཕྱག་མཛོད།) of Luding Labrang Ven. Gesar, the general secretary (ཕྱག་མཛོད།) of Thartse Labrang Ven. Sonam Gyalpo and the general secretary (ཕྱག་མཛོད།) of Khangsar Labrang Ven. Ngawang Dakpa instructed him to teach the younger monks. He taught young monks for three years in Ngor Monastery. Meanwhile, he received  teachings like "Bodhicharyavatara" (སྤྱོད་འཇུག), "The Thirty Verses" (སུམ་ཅུ་པ།) and "37 Practices of Bodhisattvas" (རྒྱལ་སྲས་ལག་ལེན།) from Khenpo Dawa Tsering. He used to refer to many books during his leisure time. He was reading a book called "Sarvavid Vairochana" (ཀུན་རིག). In that book, it was mention that "deity approaching practice retreat" (བསྙེན་མཚམས།) without hearing and contemplation of Buddhist major textual is not of benefit as well as performing ritual pujas without appropriate retreat perfection is the destruction of both self and others. Therefore, an enthusiasm to explore Buddhist major textual arose in his heart.

Ven. Khenpo Tsewang Rigzin decided to leave from Ngor Monastery. Because he wanted to join Sakya College, Mussoorie, India, for further education in Buddhist major textual. After trying many times, he got permission to leave with the recommendation letter from His Holiness 41st Sakya Trizin Rinpoche and His Eminence Luding Khenchen Rinpoche  Thus, he joined Sakya College at the age of 29.

His Eminence Luding Khenchen Rinpoche bestowed teachings like empowerment of "Hevajra" (ཀྱེ་རྡོར།), blessing sermon of "Naro Kha-Choema" (ནཱ་རོ་མཁའ་སྤྱོད་མ།), transmissions of "Gur-Lha-Gye" (གུར་ལྷ་བརྒྱད།), two times sermon and initiation of "Mahakala" (ཆོས་སྐྱོང་མགོན་པོ།) and empowerment of "Sarvavid Vairochana Puja" (ཀུན་རིག). In Lingtsang settlement, Manduwala, he received a sermon of "Sarvavid Vairochana Puja" (ཀུན་རིག་ཆོ་ག) two times from the most venerable Khenchen Appey Rinpoche. He mastered his monastic education at the age of 37 and received an education completion certificate from His Holiness 41st Sakya Trizin Rinpoche. At the age of 38, he did nine months practice retreat of the supreme "Hevajra" (ཀྱེ་རྡོར།) and "Fire Puja" (སྦྱིན་སྲེག), in Ngor Retreat Center, Masoori, India. On 39, he sat on a long Sadhana of "Sarvavid Vairochana Puja" (ཀུན་རིག) for six months. On 40, he completed eight months retreat of deity "Vajrabhairava" (རྡོ་རྗེ་འཇིགས་བྱེད།). In that winter, he became "Gekoe" (དགེ་བསྐོས།) (one who enforces discipline in a monastery) on the initiation ceremony of "Tantra Section of "Abhidharmasamuccaya" (རྒྱུད་སྡེ་ཀུན་བཏུས།) bestowed by His Holiness 41st Sakya Trizin Rinpoche.

In 1995, he went to Singapore for fifteen days with His Eminence Luding Khenchen Rinpoche in Rinpoche's service. In 2000, he travelled to Taiwan with His Eminence Ngor Thartse Khen Rinpoche in the service of Rinpoche and stayed there for eight months. Respecting the wish of Rinpoche, he stayed at "Taiwan Tau Yuan Sakya Center" for some months. But his thirst for learning has not quenched. So, he returned India. In the year 2000, during the discourse of "path and fruit", (ལམ་འབྲས།) by His Holiness 41st Sakya Trizin Rinpoche , Khenpo Tsewang Rigzin requested the most Venerable Khenchen Sonam Gyatso to allow him to practice Sadhana in Khenchen's retreat center. The most Venerable Khenchen Sonam Gyatso willingly granted him to do his Sadhana there.

In that retreat centre, Khenpo Tsewang received empowerment and sermon of "Jungpo Duljed" (འབྱུང་པོ་འདུལ་བྱེད།) as a preliminary (སྔོན་འགྲོ།) of "Sadhana" from His Eminence Luding Khenchen Rinpoche. He accomplished the practices of "Jungdul" (འབྱུང་འདུལ།), "Preliminary" (སྔོན་འགྲོ།), "Three Perceptions" (སྣང་གསུམ།) and "Hevajra" (ཀྱེ་རྡོར།). He also accomplished the accumulation of "Thirty-Seventh Mandala" (མནྜལ་སོ་བདུན་མ།) one hundred ten thousand times, "Pure realm" (ཞིང་ཁམས་རྣམ་དག་མ།) one hundred ten thousand times and "Sa-Xi-Poechuma" (ས་གཞི་སྤོས་ཆུ་མ།) one hundred ten thousand times. He accomplished other practices such as the base approach of "Naro Kha-Choema" (ནཱ་རོ་མཁའ་སྤྱོད་མ།), "Mahakala in the form of Panyjaranatha" (ཆོས་སྐྱོང་གུར་གྱི་མགོན་པོ།) and "Fire Puja" (སྦྱིན་སྲེག). Still, he wanted to perfect himself on the dharma text "path and fruit", (ལམ་འབྲས།). Venerable Khenpo Tsewang Rigzin got permission to stay three more years at Ngor Monastery as he humbly requested the most Venerable Khenchen Sonam Gyatso. However, he could not fulfil his wish to explore more on the dharma text "path and fruit", (ལམ་འབྲས།).

When he reached Namgyal Monastery, he first had a meeting with the monks regarding how to preserve and maintain the monastery and its valuable historical tradition. Ven. Khenpo Tsewang Rigzin and the monastic sangha members decided to start a monastic school. However, there were no possibilities to build a school due to the poor financial condition of Namgyal Monastery.

Therefore, Venerable Khenpo Tsewang Rigzin went to Kathmandu with the capital of Nepalese rupees twenty thousand. In Kathmandu, he printed some donation receipts with financial help from Rev. Lekshey Tendar. He collected a donation of about two hundred thousand Nepalese Rupees from the people of Mustang in Japan. Then, he travelled to Singapore but did not receive a penny. From there, he flew to America. The people of Mustang in America helped him with their best efforts. He again flew back to Singapore. That time, he got support from Jennifer Tan, Jennifer Ee, and Lim Siong Choo.

In 2005, he started Pal Ewam Namgyal Monastic School with 15 novice monks on the 4th day of the 6th month according to Tibetan Lunar Calendar, on Buddha's first teaching. At the time, there were no proper classrooms. Classes were conducted in the resident of the monastery.

In the Summer 2005 Khenpo Tsewang met two Italian lady, Francesca Stengel and Mariagrazia Ferro.In 2006, Ven. Khenpo Tsewang built a school near the monastery in Namgyal, Mustang. Mrs Francesca Stengel, Mrs Mariagrazia Ferro, raised funds to help building the monk's school. From then, a winter mobile school for the five months had started with the rental house in Pokhara. In 2009, he built a monastic mobile school at Bhakunde, Pokhara, with the help of Singapore, Malaysia and Taiwan's donors. People of Mustang in North America and South Korea had also contributed hugely. On 11 March 2012, His Holiness the 41st Sakya Trizin Rinpoche inaugurated Pal Ewam Namgyal Monastic School.

A Singapore volunteer group lead by Mr Ong Wee Yeap called Love @ Pal built a dining hall and kitchen for the students in Bhakunde, Pokhara that inaugurated on 13 August 2013. Later, dormitories for the students had added with the kind financial help of Mrs Belinda Chan from Malaysia.

In 2009 Francesca and Mariagrazia proposed Khenpo Tsewang regarding a nunnery school to offer education to girls as well. Khenpo Tsewang was enthusiastic about founding a girls' school at Namgyal Monastery to renovate the nunnery tradition in Mustang.

Until 2016, Nunnery mobile school in Pokhara had to conduct in a rental house. In 2016, he built the Nunnery school at Khapaudi, Pokhara, with the generous financial help of Malaysian donors Mr Ho Kim Hee, Mr Goh Doal Tuck and Mr Ling Muo Tuan. On 27 October 2016, His Eminence Ngor Thartse Khen Rinpoche inaugurated the new building of Nunnery school at Pokhara. In 2017, he built five classrooms with the help of the Singapore volunteer group Love @ Pal, Mr Ong Wee Yeap and Ms Shiyuan.